The Galapagos has to be on any nature photographer’s short list of most wanted places to go…it is on the bucket list for those who simply appreciate nature, and many a pure tourist longs to tick it off the list. I know it is a cliche but there is truely no place like it in the world. The Galápagos Islands sit right on the equator, in the middle of the Humbolt Current, just far enough off-shore from Ecuador to maintain a totally unique habitat. There are certainly birds and animals there that you can see no-where else…but the real magic is in how close you can approach all of the island residents. Combine that with some of the most stunning seascapes and landscapes imaginable…sunrise to sunset…and why wouldn’t anyone want to travel there?

Since I was already in South America for the Wildside Nature Tours Amazon Riverboat Adventure, I was also invited to participate in a special, small-boat, 7 day trip to the Galapagos. Kevin Loughlin, the major partner in Wildside Nature Tours, does the islands at least twice a year. Our trip was his 24th. He knows the best boats, the best guides, and the islands themselves as well as anyone in the business…better than most. His tours, generally limited to 12 people, spend more time ashore on the islands than any others. Land time on any island is limited to 4 hours per boat, and no more than 20 people. We got to spend the whole 4 hours on each trip ashore, while most boats had to fit several groups in that same time frame. We got to sit with good subjects for the perfect shot, and take all the time we wanted to appreciate the scenery.

On this trip again, I used only the Sony Rx10iii. It’s 24-600mm zoom covers the ideal range for the islands. Much of the time I had to zoom back from 600mm. The birds and animals were just that close. And the Sony in-camera HDR was perfect for the sunrise and sunsets, and the amazing island and seascapes. Then too, most of the other folks on the trip were carrying 20-40 pounds of camera equipment ashore each day. My Sony, with the same kind of capability as their whole outfits, was much easier to carry, and fit in a small wet-bag for the wet landings. I really appreciated it by the end of 4 hours in the equatorial heat of the islands.
We spent our first night in Ecuador at the Garden Hotel near the airport in Quito. Wonderful grounds and a great atmosphere. And the first of my Ecuadorian Hummingbirds.

The next morning we were off early again to catch a two-hop flight to the Galapagos…though you stay on the same plane there is a short layover in Guayaquil. Having realized the shortcomings of my packing while on the Amazon, I spent the time at the airport in Quito searching, successfully, for a small day-pack to carry my camera on the wet landings (I already had a dry bag to go inside).

When we landed in San Cristobal, Kevin advised us not to try to photograph the birds at the airport. Tempting as it was, he assured us we would have better opportunities on the other islands we were to visit. Still, when you get to the dock to board the pangas (rubber zodiac like boats) that take you out to your yacht, it is impossible to resist the sea lions who greet you, or would greet you if they were awake. 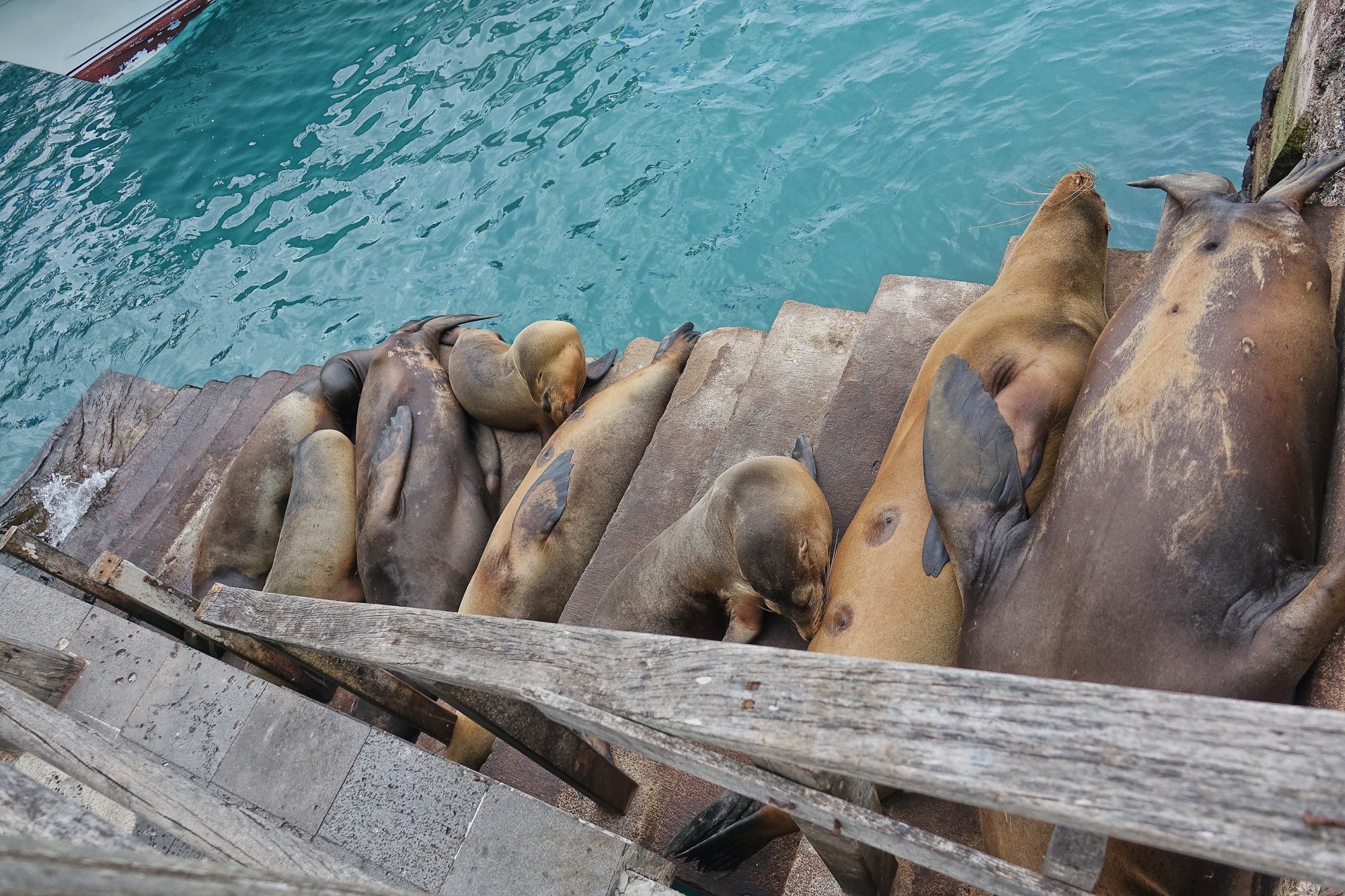 After room assignments and lunch on the yacht, we returned to San Cristobal to take a bus up over the top of the island for a visit to a Tortoise Reserve and Breeding Station, for our first looks at unique Galapagos wildlife. We saw the giant Tortoises of course, but while there we also had our first encounters with one of the 4 species of endemic Mockingbirds of the islands, one of the Lava Lizards, and one of Darwin’s Finches.

We returned to San Cristobal town in time for sunset, a little shopping, and back to our yacht for the first of many excellent dinners.

To make the most of your time in the islands, the yacht moves at night, while you are sleeping. It takes some getting used to, as the waters around the islands, stirred by the Humboldt Current, can be quite choppy…but it is a small price to pay for paradise. We woke on our first full day in the Galapagos to a stunning sunrise…the first of many…and, after a hearty breakfast, boarded the pangas for a short ride to Espanola Island. Every trip to the Galapagos is a mixture of dry and wet landings. Some islands have landing jetties, and on some you run the pangas up to the beach and climb out knee deep in water to wade ashore. Kevin insists on good wading sandals for the wet landings. I also invested in two pairs of sand socks…lycra crew-style socks with neoprene soles and heels. The sand socks keep the sand out from between my toes and my feet and the sandals. Before the end of the trip could have gotten several times their cost if I had been willing to sell them. Highly recommended.

The Galapagos are all volcanic islands, but they are mixture of what I think of as short islands and tall islands. Espanola is one of short islands…essentially a slab of lava raised maybe 70 feet above the sea at its highest point. The trails are pretty rough, with loose lava underfoot and no soft landings if you fall…but both the scenery and the wildlife are totally worth the hike. 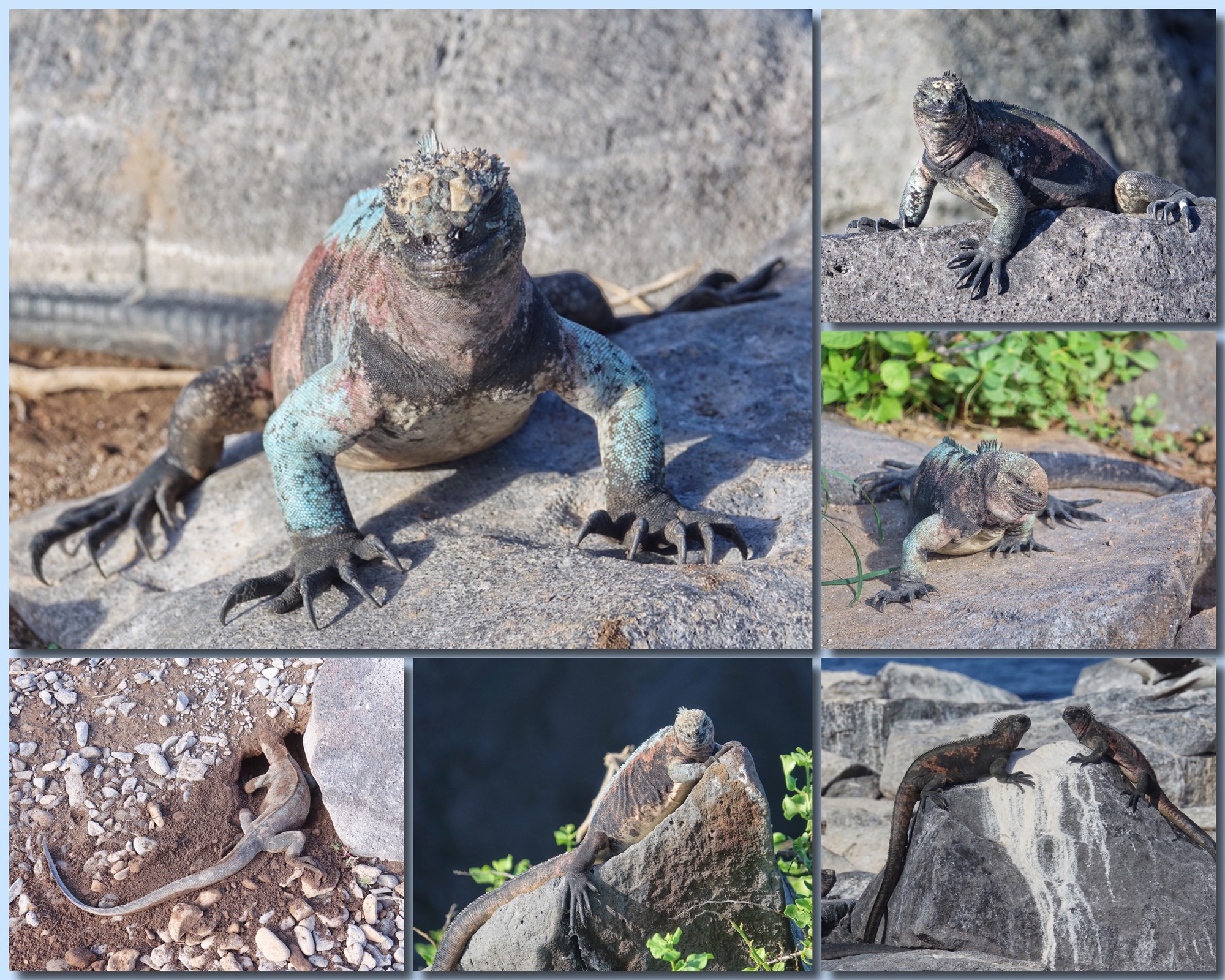 Each day there were several activities, with snorkeling generally in the late morning after time on one of the islands. I had never snorkeled before this trip, but I came equipped with an underwater camera. Unfortunately after one disastrous attempt I did not get in the water again, so I missed part of the Galapagos experience. Maybe next time…after a few lessons.
This is as good a place as any to highlight the sealions of the Galapagos. They are everywhere, from tiny pups to great beach-master bulls. They have absolutely no fear of human beings, and on several occasions we had pups come up and get very familiar with both our gear and our persons.

Our next day was spent on Floreana Island, one of the high islands of the Galapagos, and one with gorgeous beaches were Green Sea Turtles nest and rays swim in the surf. We did not see the turtles, but we certainly saw their excavations and tracks on the beach.

In the two panels above you can appreciate the real versatility of the Sony RX10iii (and soon to be iv). Flamingos at 600mm, in flight, and landscapes worth bringing home and showing off.

Overnight the boat moves us across the Humboldt Current once more to South Plaza, another short island…and indeed very plaza like. Here we had our fist encounters with the Giant Prickly Pears and Land Iguanas.

The afternoon was spent on Santa Fe Island, with more Land Iguanas, chances to photograph Tropic Birds from the cliffs, wonderful views of Swallow-tail Gulls, and a close encounter with a Lava Heron…as well as stunning landscapes.

North Seymour Island was our next to last stop…saving the best for last. North Seymour has nesting colonies of Blue-footed Boobies and a mixed colony of both Magnificent and Great Frigatebirds. The Boobies are everywhere, underfoot, nesting in the trail, beside the trail…so close you sometimes have to walk around them. And they are displaying…doing their booby dance in pairs. The Frigatebirds are almost as close, nesting in taller brush wherever they can find space…and the males are in full display (or were when we visited). It is a totally amazing experience. 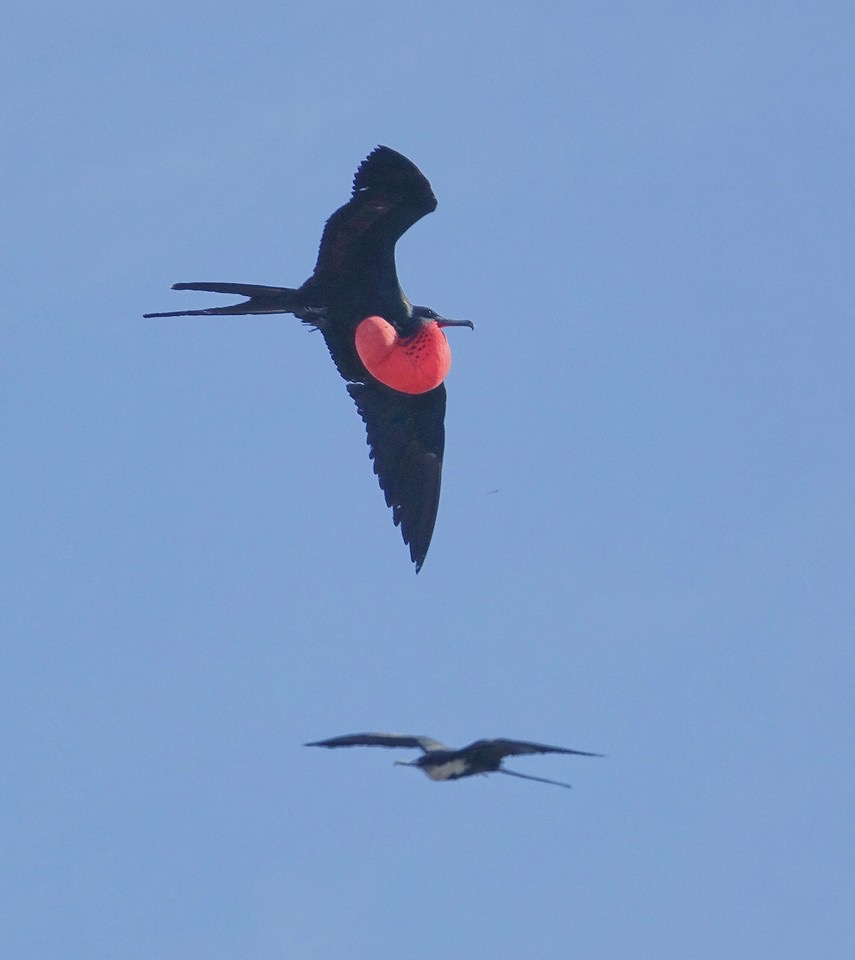 On our last full day in the islands we visited Santa Cruz, and traveled by bus up into the highlands to visit the largest of the Giant Land Tortoises that inhabit the Galapagos. We stopped along the way for some birding and sightseeing around a huge sink-hole, a common feature of volcanic islands.
It is hard to imagine just how big the Giant Land Tortoise is. When they move through the brush they are like a bulldozer…nothing stops them…and yet this giant grass eater is among the gentlest creatures on earth. Too gentle perhaps as hundreds of thousands of them were collected each year, before they were protected, by passing ships and consigned to life in the hold until the crew was hungry for fresh meat. Since protection their numbers are slowly growing on the islands and most of the high islands have reserves.

We flew back to Quito for another night at the Garden Hotel, but since most of us had night flights out, we spent our last day in Ecuador traveling to the high Andes above the city and over the other side for Andean hummingbirds. We visited a lodge that specializes in hummers and spent a slightly rainy day photographing them, and sharing a traditional Ecuadorian meal.

The Sony RX10iii really came through on the hummingbirds in low light.

We were back in Quito in time for evening flights. The end of a remarkable adventure in the Galápagos…thanks to Wildside Nature Tours.