On January 28, 2020 by lightshedder With 0 Comments - birds, Florida, nature, wildlife 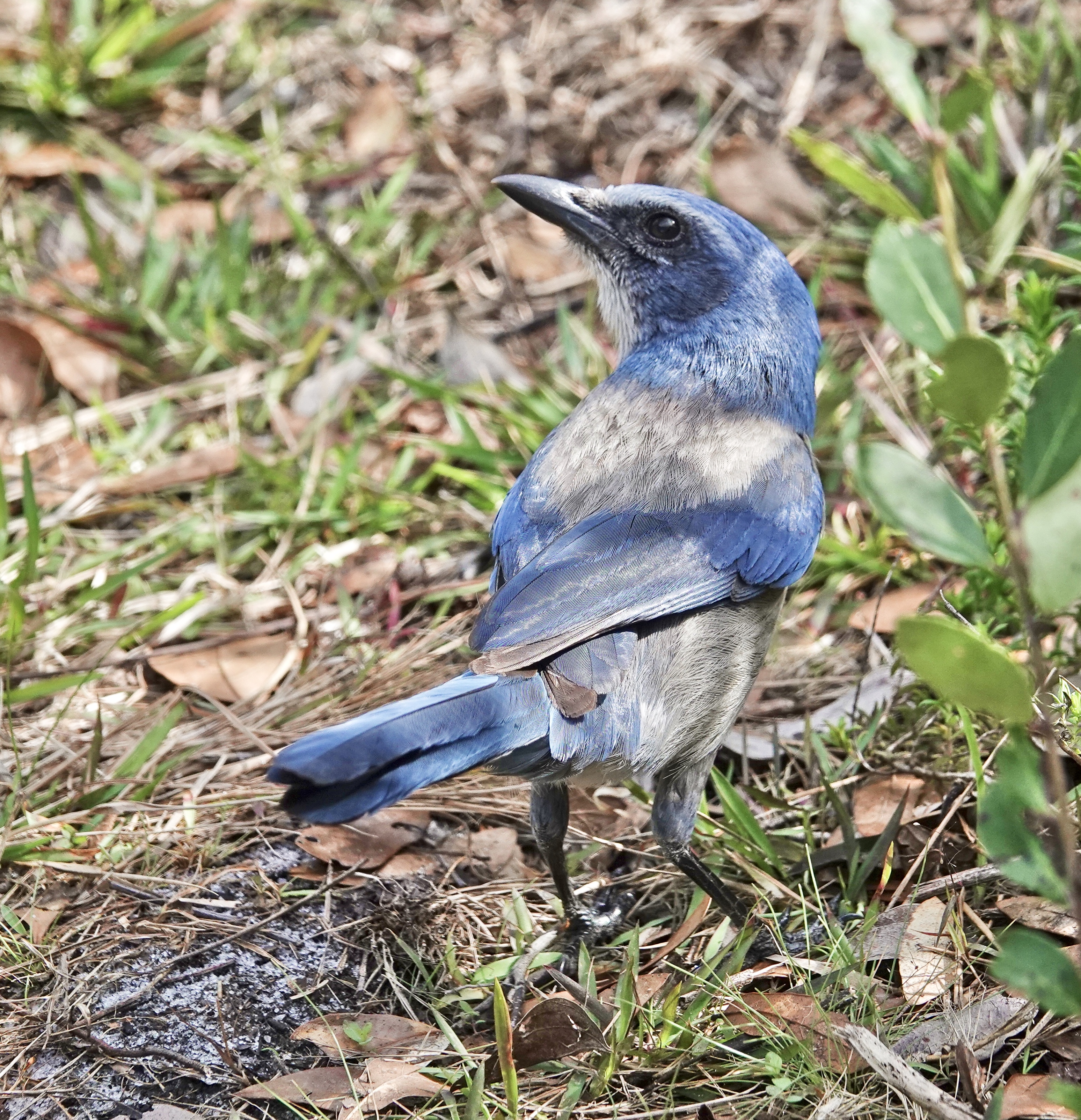 The Florida Scrub Jay is listed on both the both State and Federal Threatened Species List, due to a decline in both populations and habitat. It is the only bird endemic to Florida. The Helen and Allen Cruikshank Sanctuary in Rockledge Florida, USA was established to protect a little corner of Scrub Jay habitat in suburban Florida and the population of Florida Scrub Jays that uses the sanctuary seems to be doing well. The birds are gregarious and trusting, and either by habit or by training (people will feed them though it is against the law to do so) they are likely to come to visit you when you come to visit them. This year, perhaps because I look at bit like one of the feeding culprits, or at least have similar hat, 6 different birds (one at a time) flew up and sat on my head. It is an odd sensation, to say the least. Sony Rx10iv at 600mm equivalent. Program mode with my custom birds and wildlife modifications. Processed in Polarr and Apple Photos. 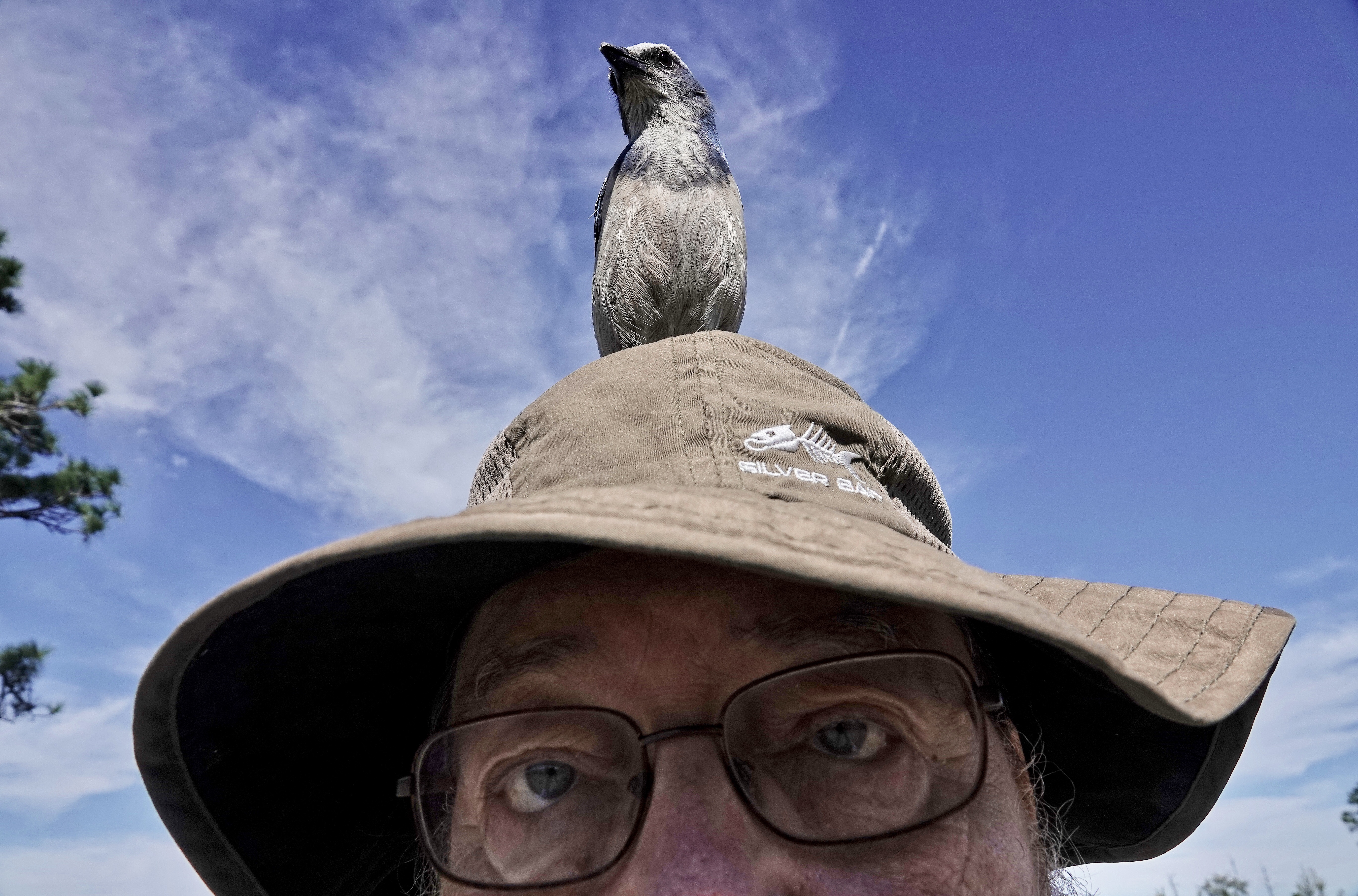 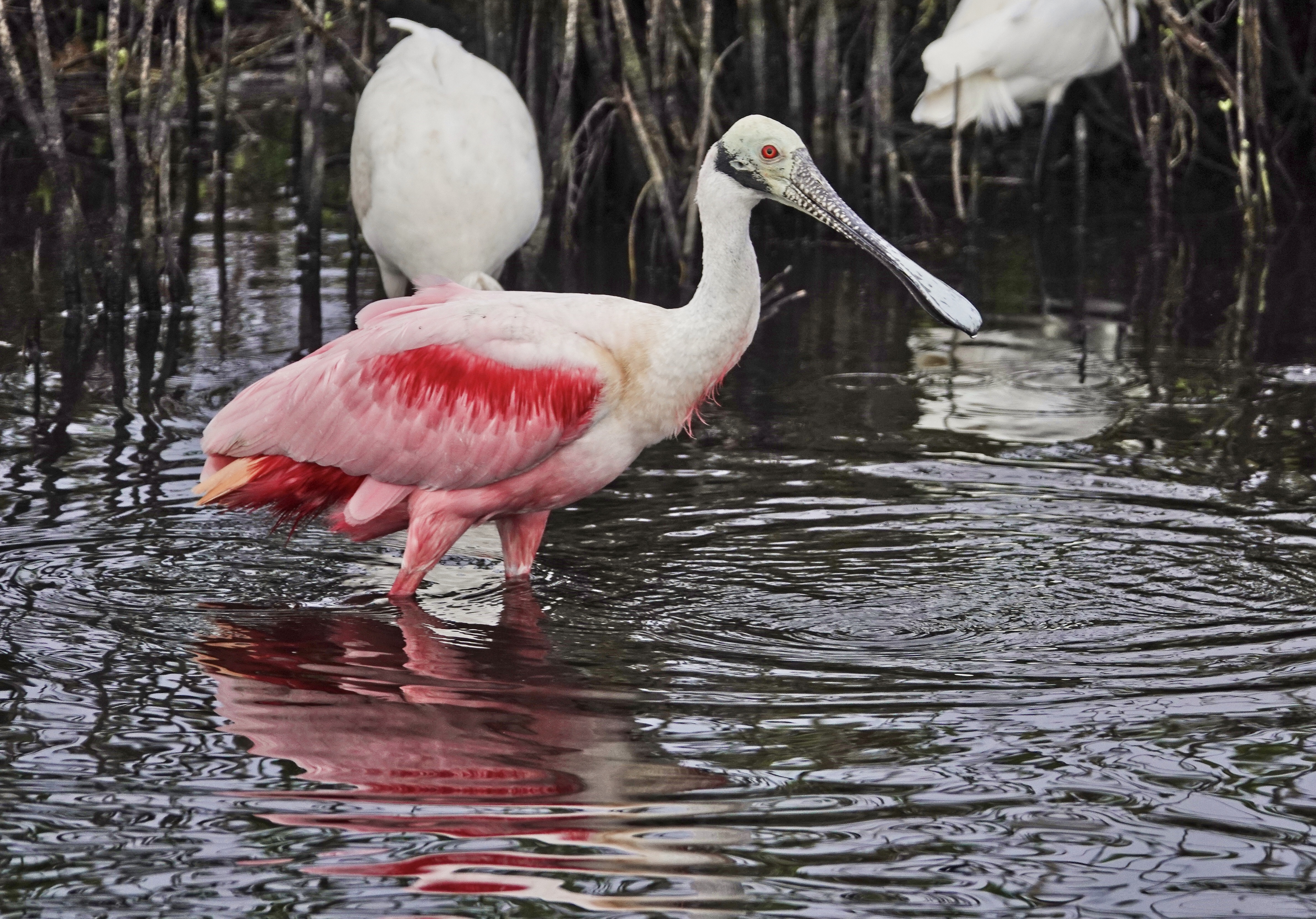 When the Roseate Spoonbills come in close…well there is nothing quite like it. This year the pinks are particularly intense…the brine shrimp hatches must be good. This is along Black Point Wildlife Drive in Merritt Island National Wildlife Refuge in Titusville, Florida, USA…in a stretch of ditch maybe 200 yards long where there were several hundred Egrets and Herons and Ibis feeding on the same hatch…along with a dozen or more Roseate Spoonbills. Sony Rx10iv at 600mm equivalent. Program mode with my custom birds and wildlife modifications. Processed in Polarr and Apple Photos.

Painted Bunting at the Visitor Center at Merritt Island National Wildlife Refuge, Titusville, Florida, USA. I had only a few moments to check the feeders at the Visitor Center for a male Painted Bunting…always a target bird during the Space Coast Birding and Wildlife Festival…not because it is all that uncommon in Florida, but because it is so beautiful. The most reliable spot is the Visitor Center, and the males are the hardest to see there. I was blessed to have this male come several times in the 15 minutes I had before I had to head back to the Eastern Florida State College where the festival is headquartered to give a workshop. There is never enough light under the trees where the feeders hang, but I got this shot with Multi-frame Noise Reduction on the Sony Rx10iv at 600mm equivalent. Otherwise, program mode with my custom birds and wildlife modifications. Processed in Polarr and Apple Photos. It is my ambition to find, someday, a male Painted Bunting in good light 🙂

On January 25, 2020 by lightshedder With 0 Comments - birds, Florida, nature, wildlife 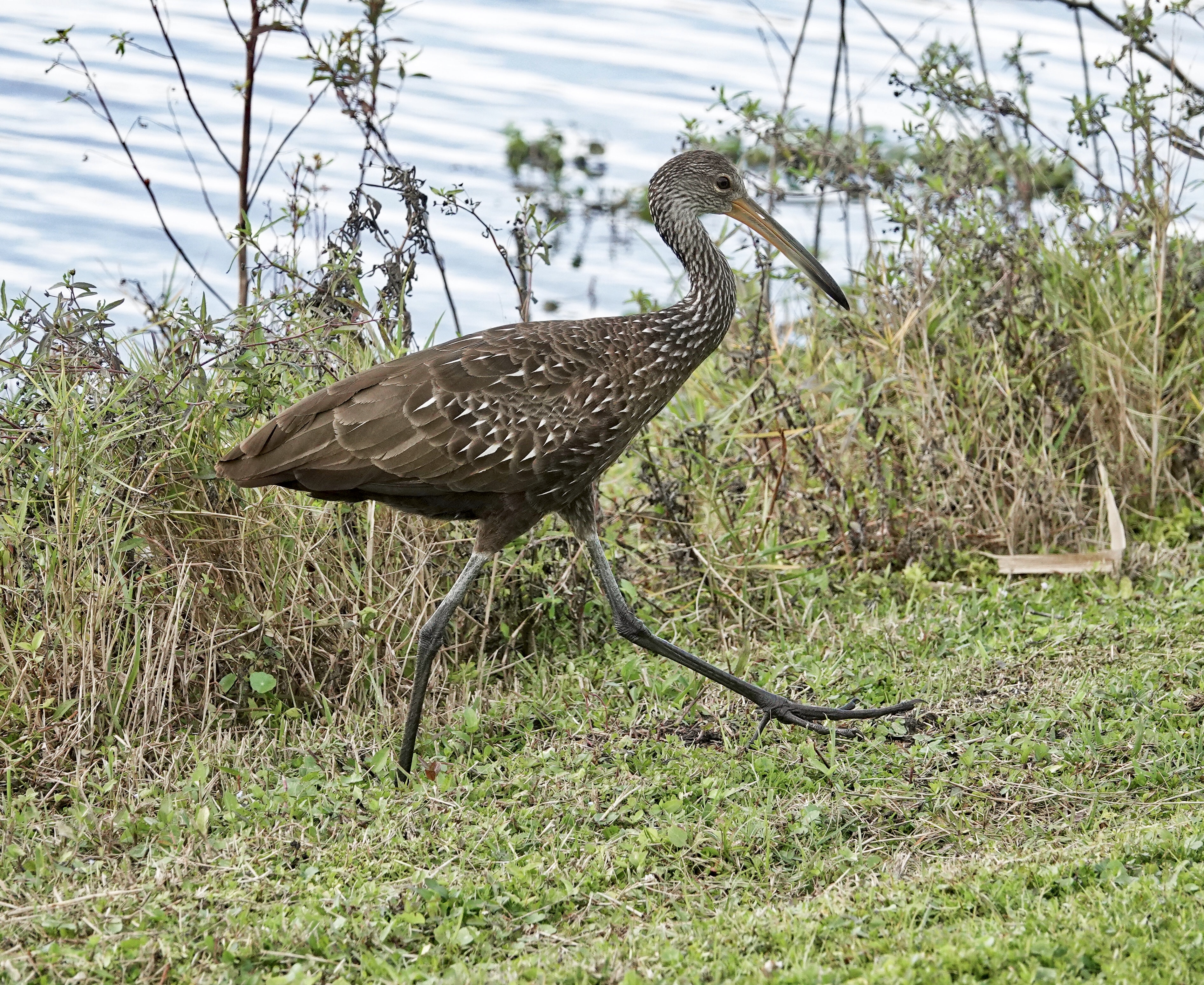 Chain of Lakes Park, Titusville, Florida, USA. On my visit to Orlando Wetlands the other day, I was disappointed to not to see a Limpkin. The ponds where I have found them the past 3 years have been dredged and they have evidently moved elsewhere. I mentioned that in one of my class-room presentations at the Space Coast Birding and Wildlife Festival here in Titusville and my volunteer moderator laughed and said they were all right behind the college (Florida State College Titusville where our festival is headquartered) at Chain of Lakes Park which surrounds the campus on three sides. I made an effort to find them afternoon before last but could not find my way into the park anywhere near where they were telling me to look, so yesterday I went to the Space Coast Audubon booth and asked for better directions. It turns out the birds are literally a 5 minute walk from the auditorium where the show is held, just beyond the edge of the campus grounds. There were 20 or more Limpkins, along the edge of the little canal there, on the grassy area between the water and the paved path, and perched in the trees on the other side. The most I have ever seen together in the past was 2. It was quite a sight. And of course Limpkins are very interesting, very ancient, and highly specialized birds, with a very limited range in the US, so it is always a treat to see them. By preference they feed on Apple Snails, though they appeared to be feeding on mussels in the canal. There is also an introduced snail that they have adopted, as the Apple Snail is declining across its range. Sony Rx10iv at 600mm equivalent. Program mode with my custom birds and wildlife modifications. Processed in Polarr and Apple Photos.

On January 24, 2020 by lightshedder With 0 Comments - birds, Florida, nature, wildlife

I will admit to having a fondness for Purple Gallinules. I don’t get to see them often…only when I come to the Space Coast Birding and Wildlife Festival in Titusville, Florida, and then only in any numbers if I get out to Orlando Wetlands Scenic Park in Christmas. Then I see a lot! They are such unlikely birds, with such a wild combination of colors and highlights…and the colors change depending on the angle of the light. And then there are those feet, or those toes actually. And of course, the way they walk across the pond weed and floating mats of plants. Altogether a fascinating bird. And I have not even mentioned their voice. 🙂 Sony Rx10iv at 600mm equivalent. Program mode with my custom birds and wildlife modifications. Processed in Polarr and Apple Photos.

Wilson’s Snipe in the open! 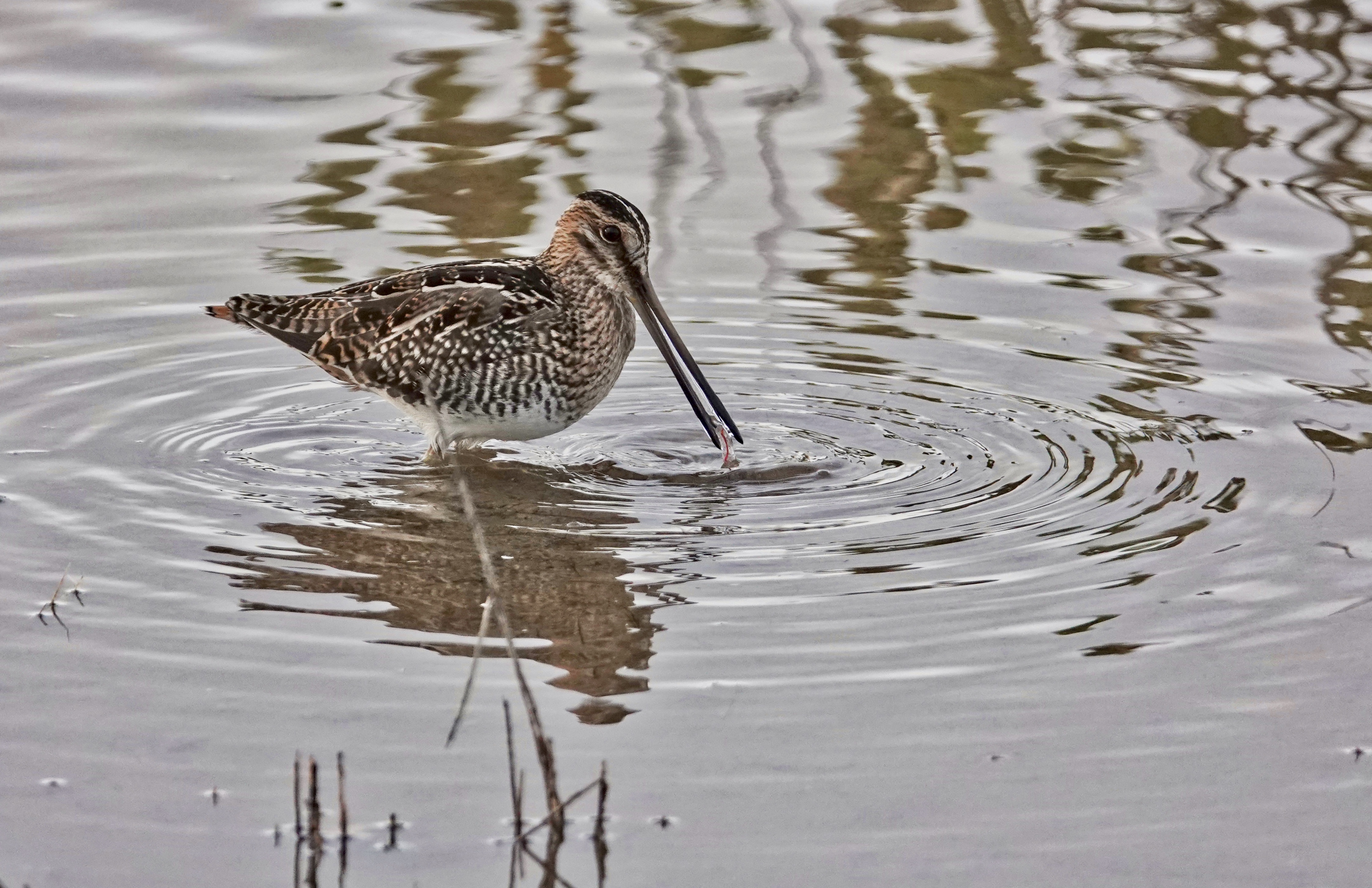 It is not often, in my experience, that you see a Wilson’s Snipe right out in the open, feeding. This one was on the back side of the Black Point Wildlife Drive at Merritt Island National Wildlife Refuge in Titusville, Florida, on the first day of the Space Coast Birding and Wildlife Festival. It appears to sucking up a little wormy thing through the tube of water formed by its beak. Late afternoon on a rainy day. Sony Rx10iv at 600mm equivalent. Program mode with my custom birds and wildlife modifications. Processed in Polarr and Apple Photos. 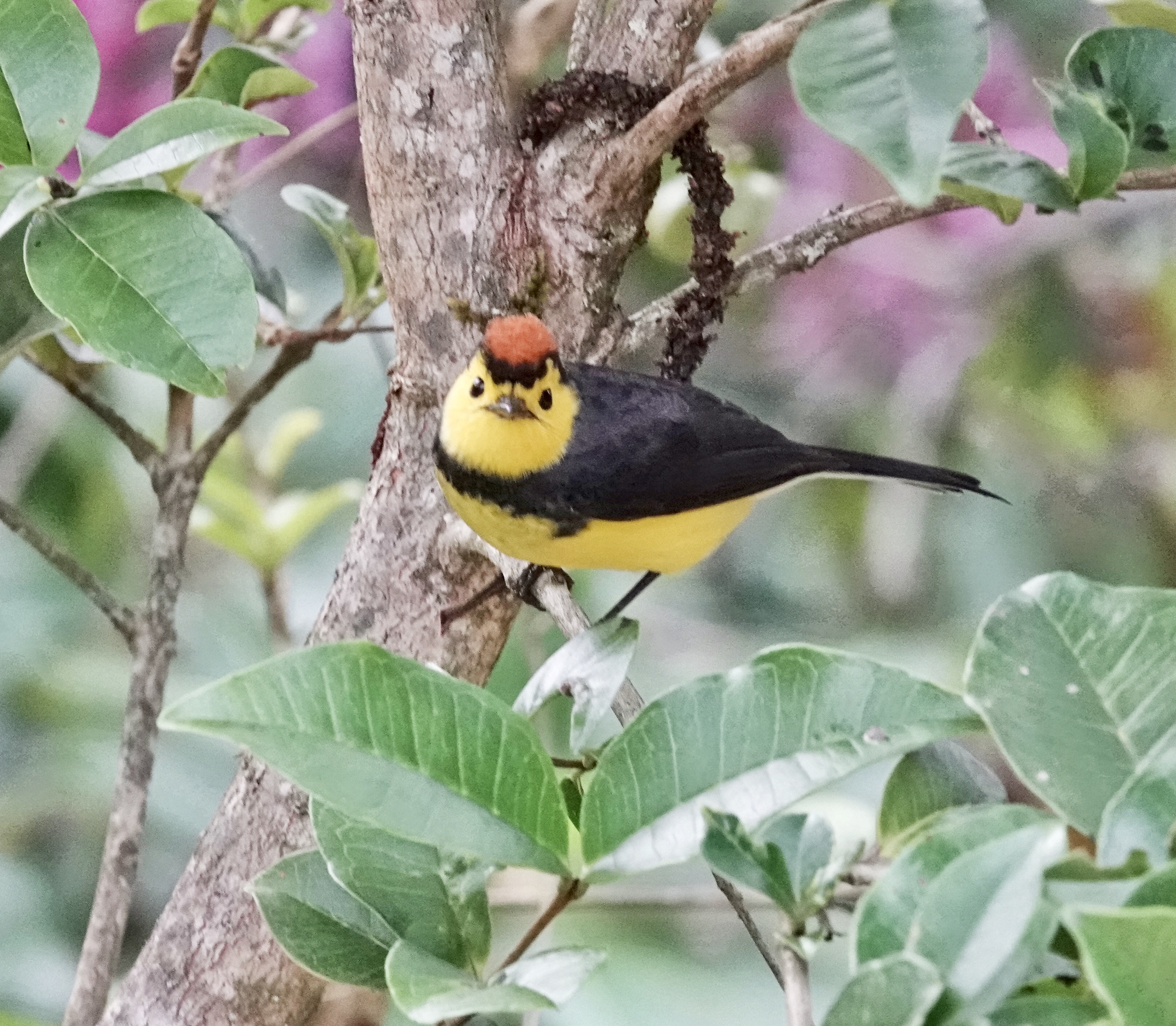 Friend of man. The Collared Redstart seems to like spending time around humans (probably because we attract a lot of bugs?). This one was working the grounds of Savegre Mountain Hotel, Reserve, and Spa around my cabin on our last full day in Costa Rica. Sony Rx10iv at 600mm equivalent. Program mode with my custom birds and wildlife modifications. Processed in Polarr and Apple Photos.

Streaming in the wind: Resplendent Quetzal 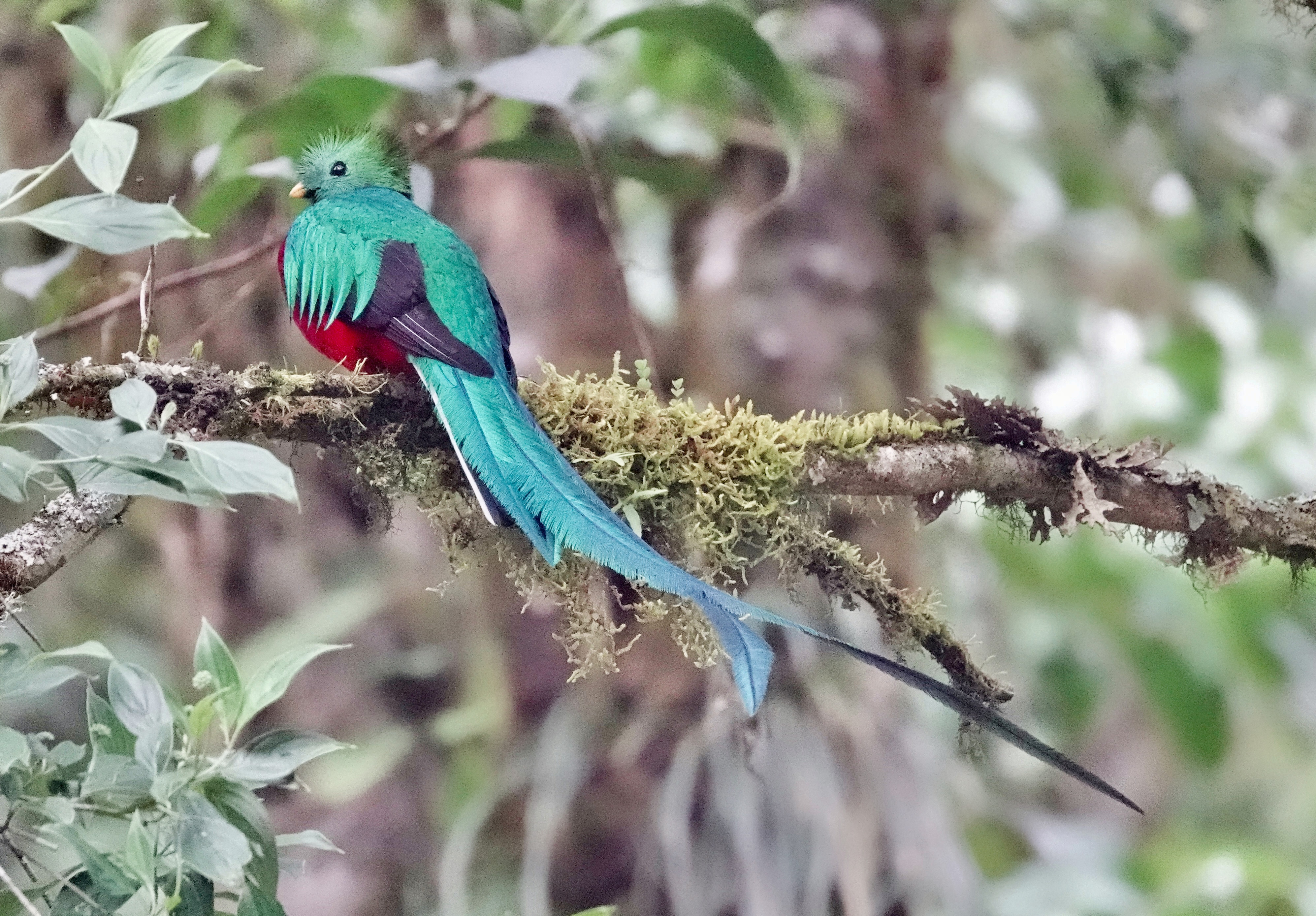 Another shot from our “chance” encounter with a Resplendent Quetzal in San Gerardo de Dota, Costa Rica. “Chance” in the sense that we were not looking for Quetzals when we saw it…not chance at all, of course, in the sense that Edwin, our guide, was always looking for Quetzals in the cloud forest of the Savegre River valley. Those long, streaming tail coverts are shown to good advantage here, and you can even see the real tail peaking out from behind. Sony Rx10iv at 600mm equivalent. Program mode with my custom birds and wildlife modifications, plus Multi-frame Noise Reduction. Processed in Polarr and Apple Photos. 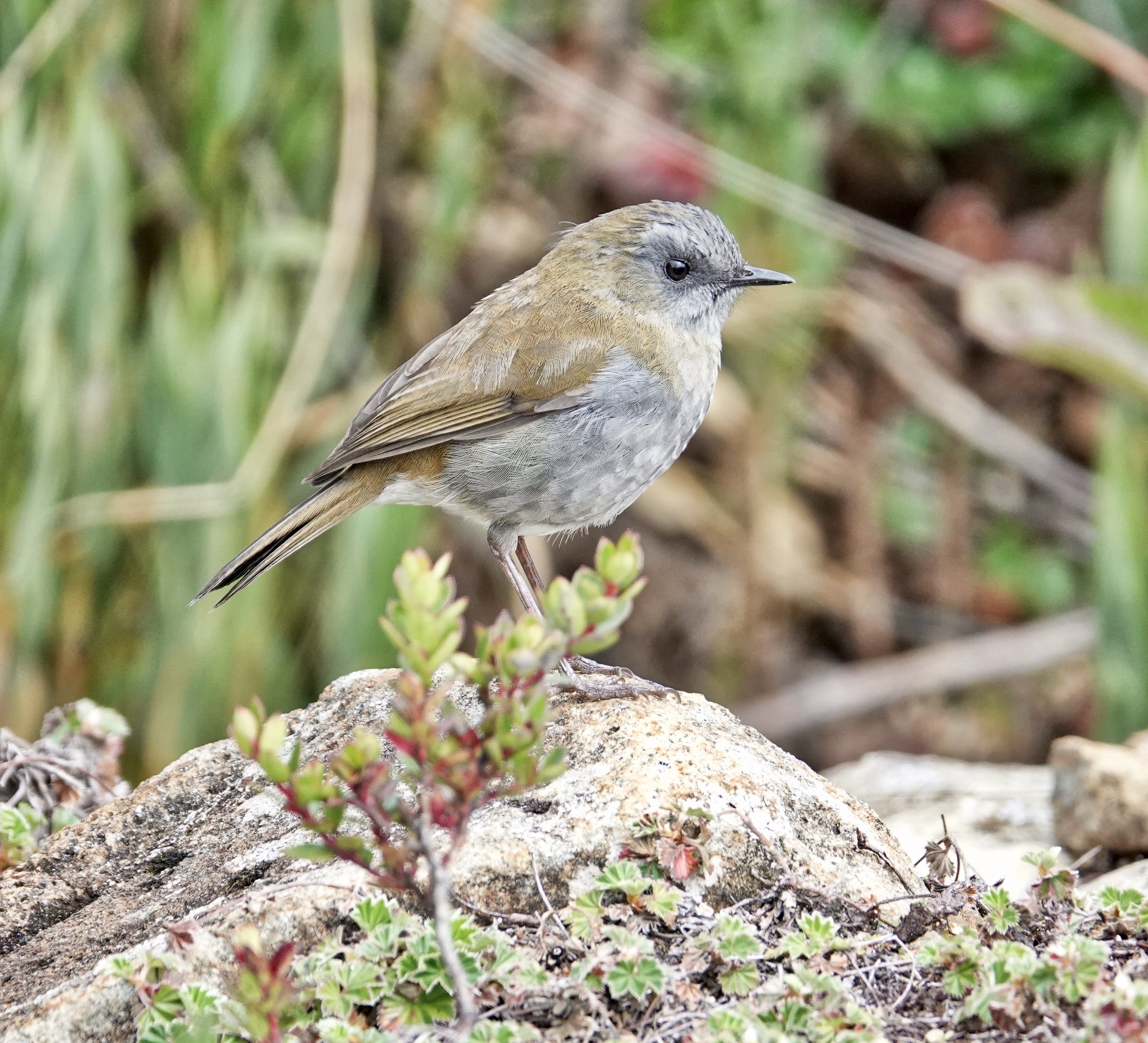 It was cold and windy and rather damp on the Paramo when we visited, in the mountains above San Gerardo de Dota, Costa Rica, and we got only glimpses of the target birds…Volcano Junco and Timberline Wren…but some of us got great looks at this Black-billed Nightingale-Thrush. The Nightingale-Thrush is a common bird of forest edges in the highlands, so this one was at the upper end of its elevation range. Not a tree in sight, let alone a forest. Sony Rx10iv at 600mm equivalent. Program mode with my custom birds and wildlife modifications. Processed in Polarr and Apple Photos. 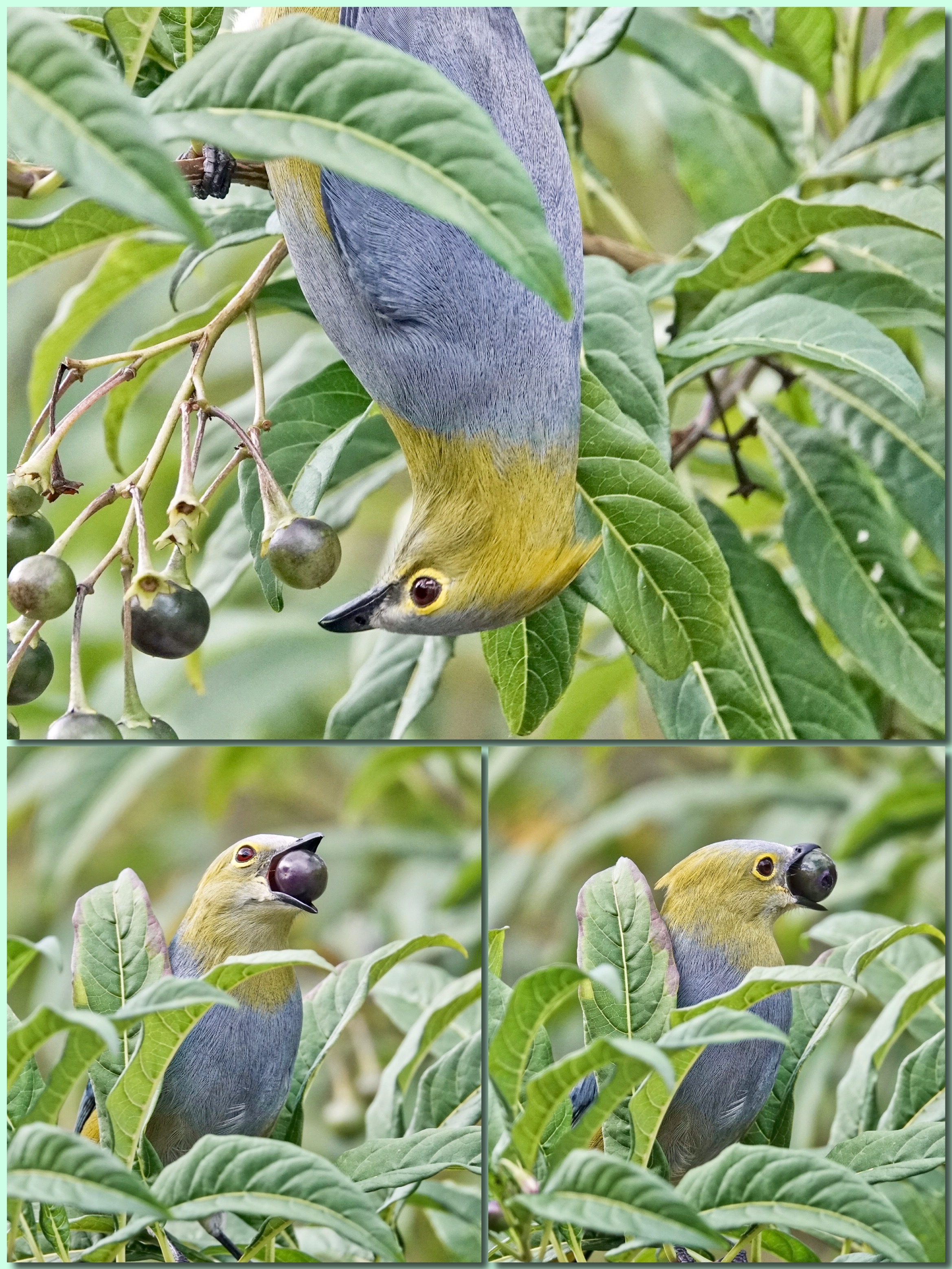 The Long-tailed Silky-Flycatcher is not a flycatcher, nor is its tail particularly long, as tails go, but it is “silky”…in the same way a Cedar Waxwing is “silky”. The feathers are fine and lay close to the body. It is a fruit eater, as you see here. They are common around the grounds of Savegre Mountain Hotel, Reserve, and Spa in San Gerardo de Dota, Costa Rica in December when the Point and Shoot Nature Photography Adventure visits, as there are two fruiting trees close to the dinning hall that attract them. This is as close to one as I have been, as it settled on fruit in a tree about 6 feet from me while I was waiting for our bus. Snap. Snap. Snap. Sony Rx10iv at 600mm equivalent. Program mode with my custom birds and wildlife modifications. Processed in Polarr and Apple Photos. Assembled in FrameMagic.